Kempinski Hotels is set to open nine new properties this year — including two in Saudi Arabia and one in Egypt — as part of the group’s expansion strategy in the Middle East.

The luxury hospitality group sees the region as a key growth area and an important market for outbound tourism to its properties across the world.

“The Kempinski Hotel Royal Maxim will predominately cater to corporate and Mice [meetings, incentives, conferencing and exhibitions] business, as well as major social events as it will have the largest pillar-less ballroom in Cairo. It will be our second hotel in Cairo and it is located in New Cairo, which is close to Cairo International Airport and the American University of Cairo,” said Avsar Koc, Kempinski regional sales director for India, Middle East and Africa.

Enhanced by strong growth in the Middle East, Africa, and South-east Asia, Kempinski was able to increase its room revenue by 21 per cent in tandem with a 17 per cent increase in total room nights sold globally. The region contributes almost a third of the revenues for the company, which currently operates a total of 75 five-star hotels in 30 countries. Kempinski returned to Jeddah this week with its seventh annual Middle East Road Show, where they revealed that the group had achieved its best financial results in its history in 2012, with revenues reaching â‚¬1.1 billion.

“We have turned Kempinski around from an almost-bankrupt business into a rock-solid one with an equity ratio of well over 40 per cent. With a revenue of â‚¬1.1 billion, our hotels passed the billion mark for the first time last year,” said Reto Wittwer, chief executive of Kempinski Hotels.

“As a hotel operator, this makes us a strong and reliable partner for hotel investors and owners. We will continue to plan and work on a long-term basis… Our success proves we are on the right track.”

The Middle East remains a key feeder market for Kempinski hotels in Europe and Asia, such as the Hotel Vier Jaherszeiten Kempinski Munich, the Kempinski Grand Hotel des Bains St Moritz, the Ciragan Palace Kempinski Istanbul, and the Siam Kempinski Hotel Bangkok. Likewise, hotels such as Emirates Palace in Abu Dhabi and Kempinski Hotel Mall of the Emirates in Dubai remain popular with Middle East guests.

The Saudi Egyptian Construction Company (SECON) signed recently a management agreement with Hilton Worldwide for its new hotel in Maadi. Hilton international will carry on management of “Hilton Cairo –Nile Maadi hotel’’ upon the completion of the construction.

SECON has designed an hotel that meets the interest of business community as it comprises  a total capacity of 257-rooms along with a 400 square meters conference hall,  two smaller halls, and three meeting lounges and an access to a 24-hour business center. The hotel will also feature a large lobby, spa, swimming pool, two restaurants, and a business lounge. 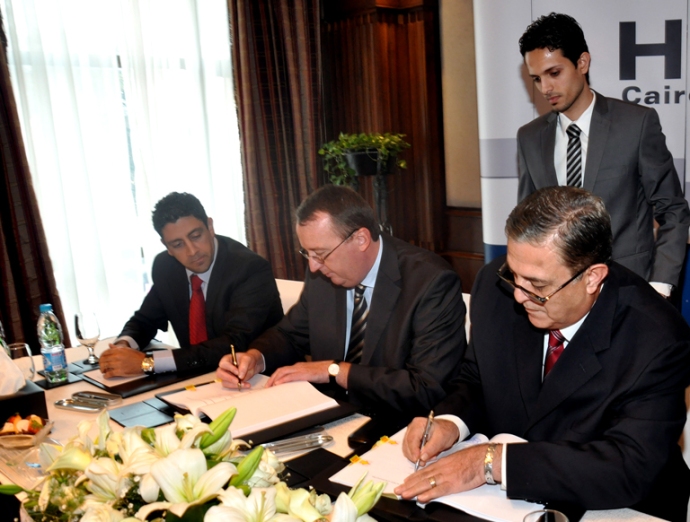 “This is the first Egyptian-Saudi project of its kind. It will endorse commitment and will enhance economic ties between Egypt and Saudi Arabia,” said Engineer Darweesh Hasanein, chief executive officer of SECON. Hasanein added that the agreement is mainly driven by SECON strong confidence in Egypt’s Economic fundamentals and its ability to attract foreign direct investment.  He also emphasized the intention of Saudi Arabia to increase its investments in Egypt to support the economic growth in Egypt despite the economic and political instability that Egypt faces during this transition period.

Construction period is scheduled to be 36 months, starting from February 2013 and will be completed by the beginning of 2016. 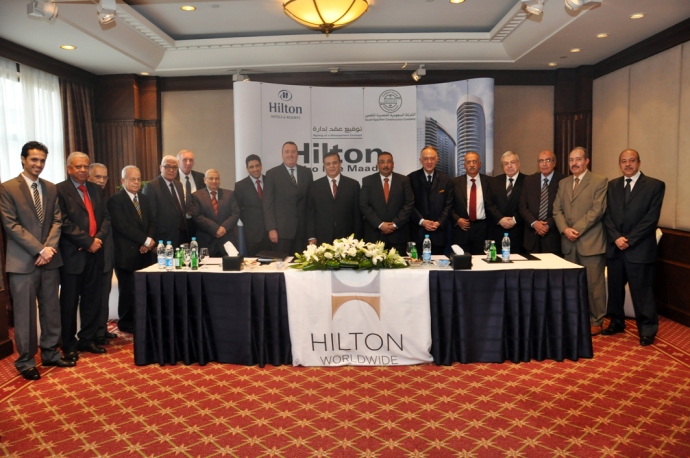 Rudi Jagersbacher, president middle east area, Hilton Worldwide, expressed great enthusiasm regarding signing this agreement with SECON, which is a significant part of Hilton Worldwide expansion strategy in Egypt. “This encourages us to pursue our hospitality services to all travellers coming to Egypt,” he said.

This was the first story ever to write in my whole life. It was published in Al Ahram Weekly newspaper in May 1991, only few months after the end of the second Gulf War. I chose to write about Nazlet El-Samman because I used to work there for few months after I graduated from University. For me, it was a totally exclusive experience. It was a place that was completely different from the place I live in. I saw a whole community dedicated to one profession, namely, tourism. I saw families who have different customs and traditions from other places in Egypt; families who know each other and form one big community. Here is the story:

A community of shop owners, horse owners, cameleers and fake statutes at the foot of the pyramids

The inhabitants of Nazlet El-Samman live at the foot of the pyramids of Giza. They have a long history of service to tourists and they desire to continue to ply their trade.

“A man called El-Hefnawi was once famous for being able to climb the great pyramid in seven minutes, and a cameleer called Lamea owned a camel of worldwide fame; it was called Canada Dry and people came from far and wide to ride it,” said Zahi Hawwas, director of antiquities of the Giza Plateau (the then minister of antiquities in the last cabinet in Mubarak’s era and also in the first cabinet after the revolution).

Such stories are also told by members of the community situated beside one of the most famous sites in the world, the pyramids of Giza. The settlement was named after Sheikh Hamad El-Samman who settled there in the 7th century; he devoted himself to worship in one of the ancient Egyptian tombs on the necropolis belonging to an official called Debhen who lived in the time of Menakaure, builder of the second pyramid.

Today the settlement has expanded and some 70,000 people live in Nazlet El-Samman. They are the people who serve an estimated 3,000 tourists who visit Giza daily in the peak season. They own the horse stables, they are the cameleers, and they are the traders who own numerous papyrus galleries, oriental bazaars, and kiosks that sell “instant antiquities” in the area. 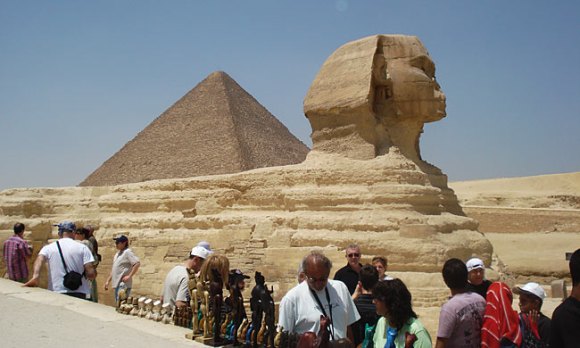 “Not all of our people are educated,” said Atef El-Gabri, the owner of a perfume shop. “But from our contact with foreigners we know a variety of languages…in fact we consider it our duty to communicate in the tongues of all the visitors who come to Giza.”

So successful is the community that sons tend to follow in the footsteps of their fathers in various trades and “some of our children who became doctors, engineers and graduates in other fields have left their profession and joined us to work in the field of tourism,” explained another resident. “Many do the necessary training and also act as guides.”

In Nazlet El-Samman there are about 100 shops and papyrus galleries, as well as about three times as many carpet shops as there are at Sakkara. The traders do a thriving business on cleverly manufactured fake statuettes, and a large variety of gold and silver jewellery is also on sale.

“Would you like to have your name carved on a cartouche?” is a frequent appeal to tourists; or “Come and look…no charge for looking!” 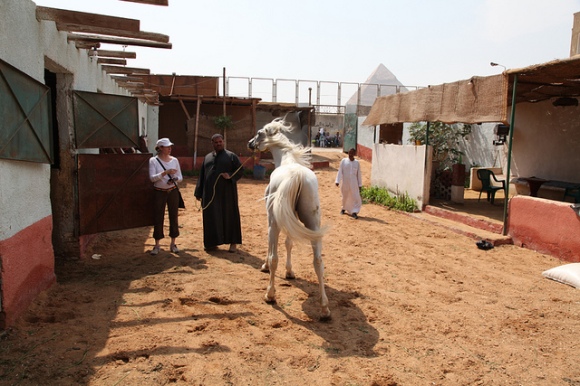 In Nazlet El-Samman, the tribal identity is strong. The inhabitants are of Arab stock; that is to say they are desert people, not Nile Valley dwellers, and they first came to the area in large numbers when the Mena House Hotel was built around the turn of the century.

“We were brought in with our horses to provide services for tourists wishing to ride around the pyramids. Later we built our own stables, and they are now 15 in the area.”

The area is characterized with large families which are closely attached to each other; there are clans that go by such names as Khattab, El-Gabri, El-Shaar, Fayed, El-Komati, Abu- Ghounan, Abu – Ghanem and Abu Talib. Members of each clan tend to intermarry and weddings are a great celebration, when animals are slaughtered for a great feast, drums like the tabla baladi announce the happiness of the families, and horse dancing is part of the festivity. Foreign visitors are always welcome at such occasions.

Camel riding at the Giza Plateau

The celebration of the birthday, or mulid, of the local Sheikh is another festive occasion. It takes place in September, and always falls on a Wednesday or Thursday. “It is like a great feast,” said Samira, another resident of the area. “There is great concern for new clothes, for swings and entertainment for the children, and also sweets, halawet el-mulid. Each house celebrates the occasion as if it were a special occasion for the householder. Large quantities of food are served. For me the mulid means spending the whole day cooking!”

Collective marriages are performed on that day, in the belief that the couples are especially blessed by the holy sheikh. “More than a hundred wedding parties are not unusual,” explained Atef El-Gabri. And just as tourists are welcome to watch or participate in wedding receptions at hotels in Cairo, and share in the happiness of the betrothed, so too are they welcomed at Nazlet El-Samman.

The people do not see themselves as obstacles to archaeological excavation and the protection of the monuments. “If a mummy is found under one of our houses the government can remove it, but there is no need to remove all the houses! is their attitude.

In fact, they are right. The government has decided that houses falling into disrepair will not be rebuilt; instead, their residents will be provided with new accommodation elsewhere. Meanwhile, the shops, stables and cameleers will remain. Tourists to Giza will continue to be enticed by established customs, and to enjoy the services of the people.

“Nefertiti, Nefertiti…..come and buy a statue for only two dollars!”

“Cleopatra will take you for a ride in the desert!”

“You want photograph on a camel!”